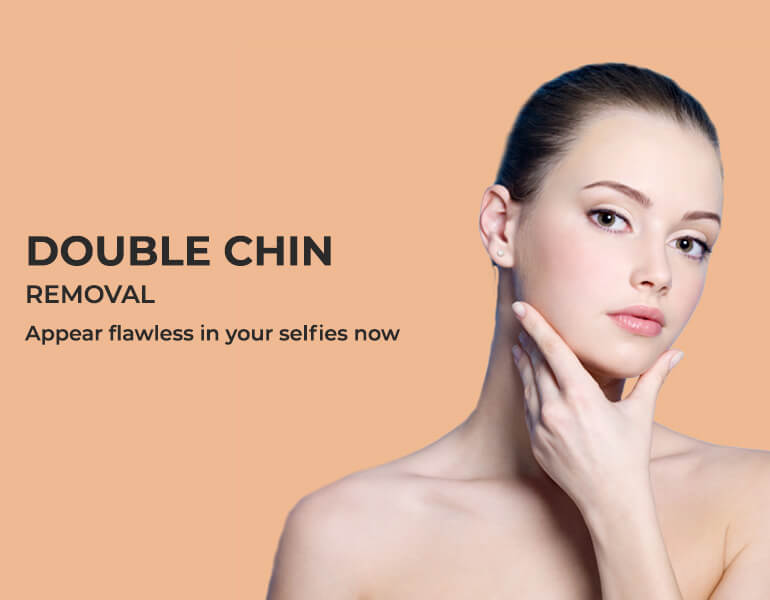 A double chin is formed when an extra layer of fat deposits under the chin. It is also referred to as neck wattle when the fat is loose and hanging. Double chin is troublesome as it can affect both men and women, and can occur at any stage of your life.

It is easily visible and since the face is the first thing people notice about you, a double chin can hamper your appearance and presentability. Labelle offers an effective double chin treatment in Bangalore to help you get rid of the double chin and regain your looks and self-confidence.

Before describing the various techniques Labelle offers for double chin treatment in Bangalore, it is useful to know about its causes. This helps in selecting the appropriate treatment method to obtain maximum results. Three major factors lead to a double chin.

In most cases, a double chin is inherited from genes. Genes determine your facial bone structure and fat deposit. People with round faces usually end up with a noticeable double chin. This cause for the creation of a double chin is unfortunate since it might be a bit difficult to get rid of it. However, you can try to maintain a healthy lifestyle to reduce the appearance and effect of the double chin.

Since a double chin is caused due to excess fat, being overweight might lead to the formation of a double chin. Once the fat gets stored in the usual spots like thighs, arms, and stomach, it starts accumulating below the chin. Quick weight loss could also lead to sagging of the chin as the fat vanishes quickly leaving the chin hanging. Regular exercise and a diet comprising of food with lower fat content can help reduce double chin.

Our bodies change with age, as the metabolism begins to slow. This leads to muscle loss, fragile bones, and loss of skin elasticity. This elasticity is what holds the skin up, so once it reduces, it fails to hold it up properly leading to sagging of skin and the formation of a double chin. Moreover, with fat depositing under the chin, once you turn 40, you have a high chance of getting a double chin.

The causes of a double chin may be multiple, but our expert team at Labelle is well known for its versatility in handling various kinds of double chin removal in Bangalore.

If a double chin has been affecting your appearance and confidence, it is time to remove that annoying roll of fat from under your chin. And Labelle is one of the best options for you to accomplish that. We offer some of the finest scientifically proven techniques for double chin reduction in Bangalore, guaranteed to deliver your desired results in a short period.

We provide various procedures for double chin removal in Bangalore:

In mesolipolysis, a fat dissolving injection containing deoxycholic acid is used for dissolving fat cells in some targeted areas in the chin. During the procedure, our skin specialist draws a grid of the dots on the area that needs fat reduction and then administers the injection into the delineated site. The number of treatments that would be required varies from person to person, and our skin specialist suggests you the optimum number for your specific requirement.

Cold temperatures destroy fat cells, and these cells are more affected by cold than other cells in the body. This property is utilized to reduce chin fat in cryolipolysis. A suitable low temperature is carefully selected to freeze the fat cells present under the chin while leaving the other cells unharmed. This leads to a reduction of double chin, and the fat cells destroyed by the process are later expelled from the body through a natural process.

Results of cryolipolysis manifest in 2 to 3 months, and there are no needles involved in this treatment. But, patients might feel some discomfort during and for a few days after completion of the treatment.

Botox can be a handy tool in shaping the jawline and providing a more defined look to the chin. It helps to tighten the muscles draping the neck, thereby reducing the double chin. Results with botox can be seen as quickly as a week, and effects can last up to 6 months, making it a very useful choice of treatment when you need to quickly get rid of the double chin.

HIFU is used for tightening up the skin, skin lifting, and also body contouring. It targets the deep skin layers and boosts collagen production and regeneration from the source. It is very useful in tightening up the sagging skin left behind when you lose fat from your double chin.

Lavatron is another treatment used to tighten and create a jawline once excess fat has been removed from the chin. It is a Radio Frequency, or RF, device which is capable of delivering both monopolar and multipolar RF. It works by heating the dermis which is the deeper layer of the skin, and the hypodermis, which is the superficial fat layer situated right under the chin area.

Does a double chin play a disruptive role in your daily life by hindering your appearance and confidence? Let Labelle help you root out its effect. Over 20 years of expertise in delivering cosmetic solutions has made us one of the best options for a double chin removal treatment in Bangalore. Our highly skilled and experienced dermatologists handle your specific requirements with the utmost care and provide you with a seamless, effective treatment along with delivering great results.

So, visit a Labelle clinic in Bangalore to get started today!

Who can opt for this treatment?

Both men and women can undergo this treatment to reduce their double chin.

Why Labelle for double chin reduction in Bangalore?

Labelle has been providing cosmetic treatment solutions for over 20 years now. We are associated with a team of expert dermatologists, who utilize the latest scientific techniques and modern equipment to deliver highly satisfactory treatment and observable results.

Treatment By Latest Technology and Equipment

Our experts will revert to answer all your queries.